The future of EU visa and neighbourhood policy at risk

"By voting yes today in Plenary to a report, which is introducing a temporary suspension of visa-free travel for third country nationals and is modifying reciprocity mechanism, (Amendment of the Council regulation (EC No 539/2001), rapporteur Augustin Diaz De Mera (EPP), we are seriously compromising the future of visa and neighbourhood policy of the European Union.

European People's Party, along with the conservative and populist forces in the European Parliament once again proved that they do not care for European citizens' security and freedom of movement, which is a fundamental human right.

The mechanism for the temporary suspension of visa-free regime is potentially dangerous and a harmful measure, especially for the Western Balkan countries. It is unacceptable that the rapporteur in the negotiations gave up powers of the European Parliament in the area of visa policy. Possible freeze of visa-travel could have very harmful consequences for the enlargement process. It would further strengthen anti-European sentiments and intolerance towards minorities, which are today most frequent asylum seekers. The Western Balkan countries should otherwise improve conditions for Roma, although they are, frankly speaking, better integrated into society in Serbia and Macedonia, than in some Member States of the European Union.

There is no direct threat today for the reintroduction of visas for one or more countries of the Western Balkans! Number of false asylum seekers is still significant, however lower than last year. European governments therefore will unlikely have a reason to immediately activate the mechanism. The hazard is the nationalist and populist forces in Europe, which could exploit the mechanism as a political tool to gain domestic political support.

I also worry about the fact that the European Parliament today, by adopting the reciprocity mechanism, runs the risk of action of the Commission before Court. We have caused a complete legal chaos. I cannot imagine the EU imposing visa obligation for the citizens of the United States of America or Canada if one or more EU Member States will continue to be exempted from the visa waiver programs. We have taken on changes to the reciprocity mechanism, which are simply illegal. Reciprocity will never be activated, as European governments have already noted in a statement that they will give priority to relations with strategic partners.

The majority in the European Parliament has unfortunately given up to the pressure of those European governments that wish to decide on the future of visa and neighbourhood policy without democratic oversight of citizens. This will be sadly felt by people who benefit from visa-free regime for travelling.

In the group of Socialists and Democrats we will do everything to protect Europeans, but not with populist measures that threaten the freedom of movement, which is a foundation of European integration," said Tanja Fajon (S&D/SD rapporteur). 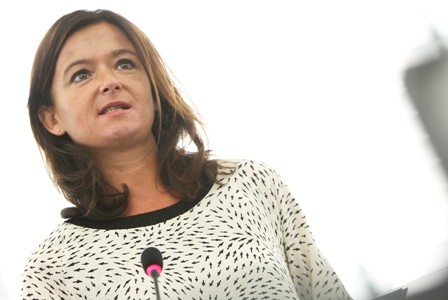